Inside Stef Choi is a world brimming with whimsical characters who love us unconditionally no matter how messed up we are. Stef has designed characters for the Laika movies “Coraline” and “The Boxtrolls” as well as for the television series’ “Powerpuff Girls” and “Foster’s Home for Imaginary Friends.” Ever since she can remember, she’s been creating a world of her own. 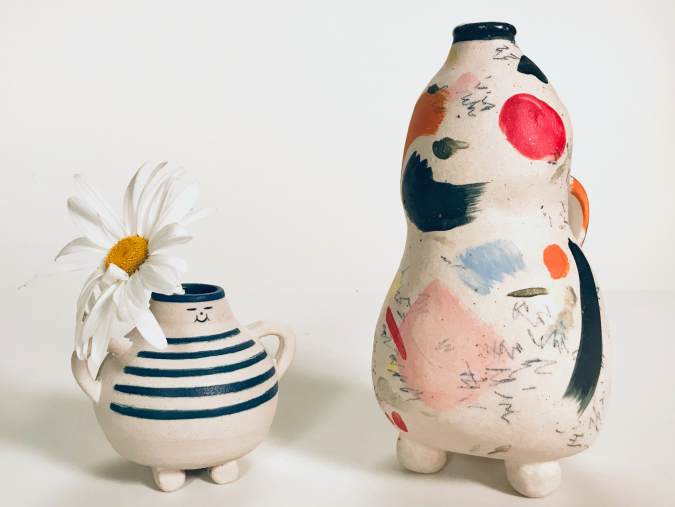 As a kid, I was obsessed with cartoons, especially with the classic animated shorts by Disney. I loved this feeling that you could bring a character to life through animation. I started drawing and creating my own animated short films in high school which helped me get into Cal Arts where I studied Character Animation. After I graduated, I started my dream job working at Cartoon Network as a character designer. Later I moved to Portland, Oregon to work at Laika as a concept design on their feature films.

My partner, Tony Candelaria and I started Belly & Bones Studios to take on independent and more personal projects. Tony directs and produces music videos and shorts, while I illustrate for commercials, books, and animation projects. I’ve always made my own personal work, like paintings and drawings and have shown in a few galleries, but for the most part, my work has been two dimensional. This will be my first solo sculpture show.  It’s exciting!

How did you get into ceramics?

So in a way sculpture started for me when Tony and I met Alejandro Jodorowsky.  He’s a film director that has made some of the most striking images in the history of films. Holy Mountain is probably his most famous. (If you don’t know his work, watch the trailer, and you’ll get the idea.)

Alejandro is involved in all sorts of things.  He came up with this type of Tarot reading that was a sort of psychotherapy for artists. Tony and I were really into Tarot at the time, and we had heard that Alejandro was doing these readings at a tucked away cafe in Paris.

Album cover design for the Portland band, Woolen Men. Stef and Tony designed 12 Tarot cards based on the music.

We flew to Paris and tracked down the cafe, but Alejandro had recently stopped doing readings to focus on making films again. His protégé, Moreno, had taken over the readings and we spent many evenings at the cafe, immersing into the world of Tarot and Psychomagic; a type of therapeutic exercise that involved roleplaying to help break through barriers in your psyche. We roleplayed an act with a man and a woman in the cafe who would play our mother and father. As it turns out, the man who played the role of our father was Alejandro’s film producer and later mentioned to us that he was looking for someone who could help adapt one of Alejandro’s short stories to stop-motion animation. It was as if we were meant to find each other.

Stef and Tony with Alejandro Jodorowsky

A week later we met Alejandro, and three months later we moved to Paris. We worked with him, on and off for 3 years. The movie, a beautiful story about love, was based on a book he’d written.

We worked with him on pre-production for over 3 years, but in the end, the film didn’t get made.  One of my favorite parts of the project was when Tony and I sculpted a maquette of one of the main characters Loie. I think it really sparked my interest in exploring sculpture.

During a really intense time of working on the movie, we took a break to East London in an area called Bethnal Green. We lived next to this lovely farm called Hackney City Farm that had donkeys, sheep, and a sweet community ceramics studio.  I fell in love with it. It was a chaotic, crowded studio, with lots of drinking and smoking and laughing and craziness. Such a perfect place to explore sculpture in a loose and free way. 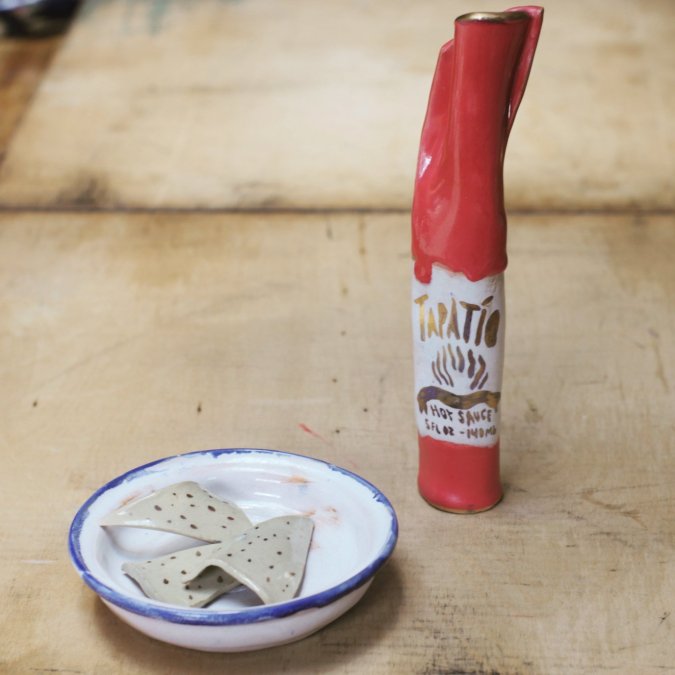 After we finished working on the film, we moved to LA, and I dove back into my own work.  I really wanted to do ceramics again and was lucky to find another ceramics studio in my neighborhood.  It really feels like a community of artists making their own independent art while supporting each other.

A witchy finger to hold your rings.

What are your inspirations?

When I think about the work I’m doing for this show, the theme has something to do with wishes and magic and bringing positivity to the world.  I feel like I have these humorous characters in this world that I’ve been cultivating for a long time and now they’re coming out in a 3D form. For example, I’m making some magic wands.  There’s a lot of intention inside the characters to bring something positive to the world.

Make a wish with your magic wand friend.

I grew up in LA in a very Chinese community. My parents are from Hong Kong. In Chinese culture and other Asian cultures, they have the traditional lucky cat that waves its arm to bring good luck or fortune. There’s also the Tanuki – a raccoon-like animal with enormous testicles that brings good luck. My characters are in that same spirit of fun, humor, positivity, and good luck. They’re like magical creatures that bring help and cultivate positivity and have empathy for people.

Another inspiration for me is movies. I love movies with complicated characters that are super emotional. Films by directors such as Mike Leigh and John Cassavetes. They have the messiest characters. It’s like the director wants to see them in all their messiness and love them for who they are. That comes out in my art. Not only do I want to create fun characters but I want them to have all this empathy like these directors have for their creations. Like they are there to love you, and it doesn’t matter how messy you are. They’re sweet with unconditional emotional support for myself and the people that connect with them. What are your plans for the future?

I would love to share this work in other countries. I’m excited to travel with it. I want to work with fabrics and get into weaving. Now that I have this other expression happening, I’m really curious about mixing it with other mediums.

One thought on “Stef Choi’s Ceramic Art Loves You Back”